When aspiring comedians and actors make the pilgrimage West, they are often just as starstruck by the famous comedy clubs in Los Angeles litting major streets as they are the famous actors. Many of those comedic actors got their start right here in those hallowed halls.

Where Can I Watch Comedy Shows in Los Angeles?

The following are some of the best comedy clubs in Los Angeles:

If you want to start performing improv or comedy at one of these comedy clubs in Los Angeles, CA, or anywhere else in the world, for that matter, you’ve got to consider taking acting or improv lessons with TakeLessons. This is one of the best ways to learn the skills you need to knock ’em dead!

Here’s a video that will show you everything you stand to gain from taking improv comedy classes: 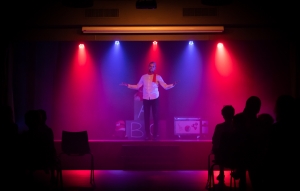 Here are some of the best comedy clubs in Los Angeles, CA – be sure to pay a visit to each if you want to be guaranteed lots of laughs!

There is probably no more famous comedy club in Los Angeles backdrop than that of The Laugh Factory. That technicolor logo in orange/yellow surrounded by blue/purple is seared into our brains for reasons both sad and glad. It’s the backdrop that was behind Michael Richards during his memorably awful onstage breakdown, as well as Dave Chappelle’s triumphant return to the stage after quitting his TV show and dropping off the comedy map for years.

Founded by Jamie Masada, who immigrated from Iran at age 14 with no money and no knowledge of English, The Laugh Factory has become a mainstay of its Sunset Strip location and even expanded to Long Beach, Chicago, and Las Vegas. Masada started the club with the intention of paying stand-up comics a fair wage (a somewhat controversial idea in 1979), but Richard Pryor, the first major act he booked, reportedly handed back his $100 split for the night, saying “you need this for your rent, boy.”

A black building covered in “handwritten” names of the comedians who have performed there, The Comedy Store is another Sunset Strip landmark which immediately confronts both hopefuls fresh off the bus and tourists hopping off their hop on/hop off Starline tour bus. The club opened in 1972 by comedian Sammy Shore (now better known as the father of Pauly “Hey Buuuuudy” Shore), but was quickly handed over to his ex-wife Mitzi in a divorce settlement. Far from just a lucky inheritor, Mitzi Shore became hugely involved with her non-traditional methods of financing as well as bucking the “boy’s club” trend of comedy clubs in Los Angeles at the time, devoting an upstairs section to booking female comedians exclusively and later creating specialty nights for gay, lesbian, and Latino performers.

However, not everyone felt so well cared for. Remember how the idea that paying comedians was revolutionary back in the 1970s? The Comedy Store was part of the old guard, with Mitzi Shore arguing that being on stage was an “opportunity” and training ground for comedians who would (hopefully) get noticed by casting agents — all while paying waiters, bartenders, and herself. Among the comedians who picked up against this policy for five weeks outside the club were David Letterman and Jay Leno. Feel free to thank them both when you get a check for your Comedy Store gig!

What’s the Best Room at the Comedy Store?

Despite being widely regarded as one of the best comedy clubs in Los Angelesthe Comedy Store has its fair share of secrets.

One of them is this – not all the rooms are exactly alike.

In fact, some rooms are better than others.

Now, for actual training grounds, The Groundlings is second to none. It’s one of the great Saturday Night Live breeding grounds for all eras of the show, with Phil Hartman, Jon Lovitz, Will Ferrell, Chris Kattan, Cheri Oteri, Will Forte, Maya Rudolph, Kristen Wiig, and more on the alumni roll. While the name refers to the school’s humble origins (“Groundlings” were lower-class members of the audience who stood on the ground to watch plays in Shakespeare’s day), having The Groundlings on your resume today is especially prestigious.

Similar to The Groundlings but a little edgier, weirder, and generally friendlier to the pocketbook is The Upright Citizens Brigade. What began in a tiny theater on Franklin Ave, the small size, affordable tickets, and legendary improv shows featuring well-known actors ensuring that every show ends up being standing room only.

In an effort not only to expand, but allow more space for students, fans, and comedians to socialize before and after shows and classes, UCB recently opened a new, larger “compound” in Hollywood that is intended to feel less like the average comedy club in Los Angeles and more like a “college dorm” where you can hang out with the next Donald Glover, Rob Corddry, Ed Helms, or Aubrey Plaza, all of whom got their start at UCB.

The Hollywood Improv comedy club in Los Angeles is another top destination for laugh-lovers.

Big names drop in here all the time – including Louis CKDana Carvey, and other big names. It’s a great place to check out during the week and the Happy Hour specials here are to die for.

A revitalization of the Hayworth Theater, this 200-seat venue has all kinds of top-notch shows, with big names including Adam Sandler and Hannah Gadsby.

7. Largo at the Coronet

The ticketing system for Largo can be somewhat confusing – you have to buy a ticket in advance but you won’t be assigned a seat. Get there early if you want to be up front!

One of the best comedy clubs in Los Angeles for watching improv and sketch comedy, Upright Citizens Brigade or UCB has spawned talents who have joined the cast of shows like SNL and even Parks & Recreation. It is highly affordable and family-friendly, with tickets coming in at less than $10 per person on average.

Want to grab a cocktail while you catch a show? Virgil is the best place to do it. You’ll love the vintage style feel of this lounge along with the comedy – catch great shows like the long-running Hot Tub with Kurt and Kristen.

iO West is known for improv. You’ll be able to take improv classes here, if you’d like, as well as view short- and long-form improv shows. There are plenty of comedy comets and sets delivered by some of your favorite names in comedy, too.

The venue is relatively small but it has an intimate and cozy feel that you’re sure to love.

Jay Leno regularly performs at the Comedy & Magic Club, yet this comedy club is miles from the Sunset Strip. You’ll love the A-list lineup and the opportunity to watch up-and-coming comics – all without having to deal with the chaos of Hollywood.

This comfortable comedy club has a fresh vibe and a relaxing atmosphere. Celebrities do drop by occasionally, but it’s more a showcase of the freshest, up-and-coming talent in Los Angeles comedy instead.

One of the most famous comedy clubs in Los Angeles is the Ice House. It’s been on the scene since 1960 and has a quiet location off the beaten track. Get dinner before the show and you’ll be sure to get the best seats!

Whether you’re interested in catching an open mic night or some good old-fashioned stand-up comedy, Westside Comedy Theater is the place to go. You’ll be able to watch big names like Neal Brennan, Dave Chappelle, Judd Apatow, and many more.

The Nerdist Showroom is in the back of Meltdown Comics and has somewhat indie origins. It was founded by Chris Hardwick and is backed by Comedy Central, yet still has a real homegrown field.

It’s not just stand-up that you’ll catch here. You can also view writers’ panels, podcast tapings, art shows, sketch school, and more. Plus, many of the shows here are totally free.

If you want to catch big names like Tina Fey, Stephen Colbert, Dan Aykroyd, or Alan Alda, you’ve got to check out Second City Hollywood. The Los Angeles spin-off of the classic comedy team in Chicago, this house of comedy is known for its classes as well as its improv and stand-up comedy shows.

Another one of the most popular comedy clubs in the Los Angeles area is Flappers. The Flappers Comedy Club showcases comics at all levels – and parking is free. There are multiple shows going on at once here in different rooms, and the waitstaff is known for being incredibly friendly and gracious.

Finally, the Comedy Union. The first black-owned and operated comedy club in Los Angeles, it has all kinds of family-friendly comics you can watch, including regular Damon Wayans.

It has a homey feel and low ticket prices, along with plenty of opportunities for you to win free tickets!

Comedy Clubs in Los Angeles 18 and Over 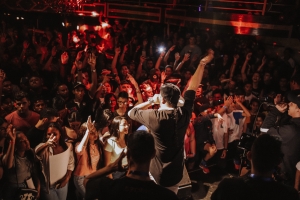 Some of the most popular comedy clubs in Los Angeles for adults only include:

Not all of these are exclusively 18+ but often host events that are for adults only – great if you need a night away from the kids!

What Are Some Free Comedy Clubs in Los Angeles?

Most comedy clubs in Los Angeles charge a fee at the door or require you to pay for tickets to various events.

However, almost all of the venues listed above do often host events that are low cost or free of charge.

These include shows at the Ha Ha Comedy Club, the Nerdist Showroom, the Laugh Factory, and the Comedy Store. There are other free comedy clubs and events we haven’t earlier, like the Chocolate Sundaes Comedy Show and the Jetpack Comedy Show, both of which are often performed and hosted free of charge.

As you can see, free or not, there are plenty of great comedy clubs in Los Angeles for you to choose from.

So there you have it!

The past and present of comedy all in one great city. All that’s missing from these famous comedy clubs in Los Angeles is the future. If you think that’s you, hop off that Starline tour bus and get to work!

Oh – and be sure to sign up for comedy or acting lessons if you’d like to perform at one of these clubs one day, too.