The latest data from Flix Patrol shows that “All of Us Are Dead” is continuing to grow in popularity. From twenty-five number one countries on January 29th, now forty-six countries rank the high school zombie thriller as the most popular Netflix offering. Brazil, Denmark, France, Germany, Japan, and South Korea are now among those countries. “All of Us Are Dead” also ranks second place in the United States, up from third place on its first day of availability. 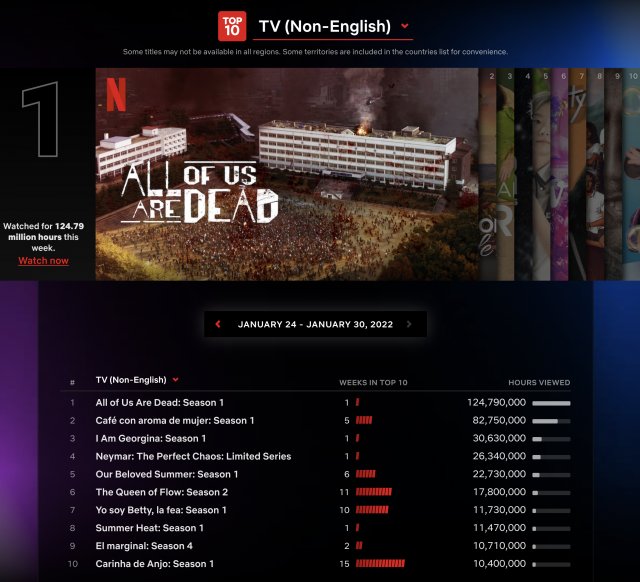 Official viewing hour figures from Netflix further confirm the trend. In its first week, “All of Us Are Dead” tabulated 124,790,000 hours across all Netflix viewers. These numbers, tabulated between January 24th and January 30th, outperform the closest competitor by over forty million hours. “All of Us Are Dead” is also the number one Netflix drama worldwide even compared to the English language leaderboard, outperforming its nearest competitor nearly thirty million viewing hours.

The only other South Korean program in the Netflix top ten is “Our Beloved Summer” which is thirteenth place on the FlixPatrol leaderboard. According to Netflix figures, it logged 22,730,000 viewing hours in the last week. This was good for a fifth place appearance in the Netflix non-English television leaderboard, and its sixth straight week in the top ten. “All of Us Are Dead” premiered on Netflix on January 28th, while “Our Beloved Summer” aired its last episode there on January 25th.