On February 4th the Good Data Corporation released the latest iteration of the Good Data Report, which tracks the popularity of various South Korean television shows across non-traditional metrics like social media. With 24.15% of all measured data referencing “Our Beloved Summer” The romantic drama took the top spot for the fourth week of January. The final episode of “Our Beloved Summer” which aired on January 25th had Nielsen ratings of 5.3%. 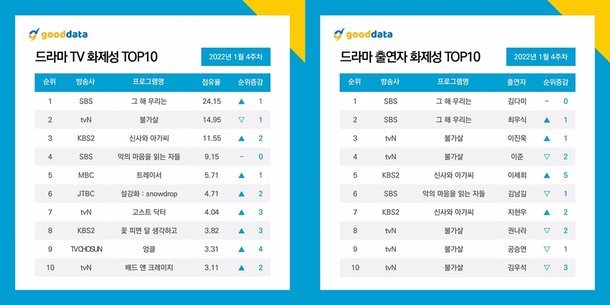 Leading actors Kim Da-mi and Choi Wooshik also led the list for performers, coming in at first and second place respectively. The tvN fantasy drama “Bulgasal: Immortal Souls” has been the chief rival of “Our Beloved Summer” on the Good Data Report throughout its run. “Bulgasal: Immortal Souls” was second place on references with 14.95% of all measured data, while its lead actors Lee Jin-wook and Lee Joon were third and fourth place for performers.