The script reading for tvN’s new drama “The Killer’s Shopping List” has been unveiled.

“The Killer’s Shopping List” is a super (market) comic investigation drama in which the market owner, cashier and district police officer deduce receipts as clues to mysterious murders occurring in ordinary neighborhoods. It is based on a short novel of the same name. Director Lee Eon-hee and writer Han Ji-wan-I are working together. Lee Kwang-soo, Seolhyun and Jin Hee-kyung will appear. 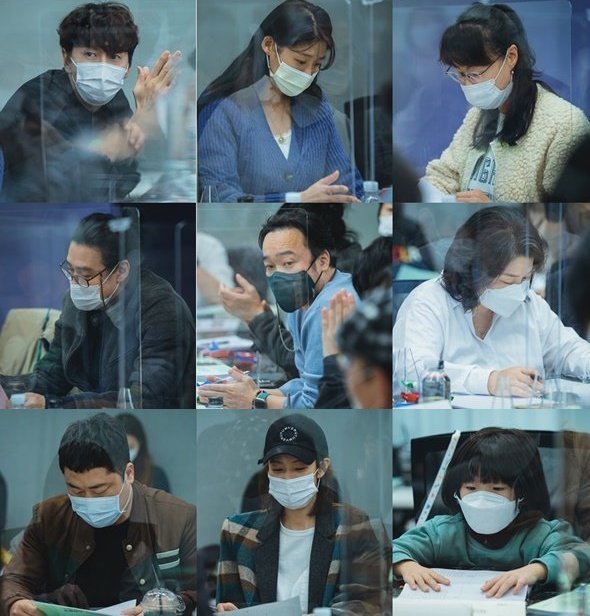 The released photos of the script reading of the “The Killer’s Shopping List” shows director Lee Eon-hee and writer Han Ji-wan-Ias well as major cast members such as Lee Kwang-soo, Seolhyun and Jin Hee-kyung. Lee Kwang-soo plays the role of Ahn Dae-seong, an informal super brain that protects the supermarket. With excellent observation and extraordinary memory hidden by ordinary visuals, he is expected to start digging into mysterious murder cases through receipts, revealing the truth that no one could have expected.

Seolhyun, who plays the role of Do Ah-hee, a 20-year-old Dae-seong lover who protects the neighborhood, going through an acting transformation. We look forward to the character chemistry of Do Ah-hee and Ahn Dae-seong. Jin Hee-kyung transforms into a superior super boss Han Myeong-sook who protects her family. She shows easy-going and cool charm and a strong aspect.

The characters and people around the mart in charge of each corner are also interesting. Shin Sung-woo is Dae-seong’s father Ahn Yeong-choon, Jang Won-young is Oh Cheon-won, Moon Hee-kyung is Yang Soon, the chairman of the apartment women’s association, Kim Mi-hwa-I as Gong San, and Park Ji-bin as Fish will appear.

Lee Kwang-soo said, “I personally have high expectations for this drama that I have not seen so far.” Seolhyun said, “I’m excited and having fun filming. I hope the actors’ tight breathing, atmosphere, and energy will be delivered well, she said. Jin Hee-kyung said, “It includes a pleasant and tense thriller, so viewers will enjoy watching it.”

The script reading scene, which perfectly harmonized the tense script that could not be relieved for a moment with the acting of the actors performing vividly, was more than expected, the production team said.

“The Killer’s Shopping List” is scheduled to premiere in April 2022.